This has got to be the most talked about Samsung product to hit the market in 2011, because of its sheer size. Is it a tablet or a phone? Well it can be both depending on how you look at it. For me, the real tablet starts at 7inches form factor. So, to me the Samsung Note is just a very large phone that has a capability of a tablet. To add to that it’s one of the biggest phone to come out powered by a dual core processor with a clock speed of 1.4GHz.

On pictures (magazine and online magazines) the Samsung Note would like any ordinary sized touchscreen phone but in reality it’s actually pretty big. It is quite large but it actually fits right smack in my big hand. To compensate for it’s large 5.3 inches screen, the Note is quite thin and very light at that something you would not expect from a large phone. Upon turning on the unit, what will catch your attention is the clarity, the crisp and vivid colors from the screen. Samsung Note comes with Super AMOLED capacitive touchscreen with a very tough glass to it; a corning Gorilla Glass variety to be exact. Here are some of the Samsung Note’s specifications; Screen: 5.3 Super AMOLED capacitive touchscreen, Corning Gorilla Glass Memory : 16 GB, 1GB RAM; expandable up to 32 GB via micro SD Network : 2G, 3G, LTE (in other markets) Connectivity: Wifi, DLNA, Wifi-direct, Wifi hotspot, Bluetooth v3.0 CPU: Dual Core 1.4GHz, ARM Cortex – A9 Camera: Back; 8MP with autofocus, smile detection and image stabilization mode with LED Flash, Front: 2mp OS : Out of the box Android OS v2.3.5 (Gingerbread), upgradeable to ICS v4.0.4 The best selling point of the Note would perhaps be the exclusive use of the apps called S Memo and S Note that basically fit for the Note alone. These apps works in conjunction with it's built in digitized stylus pen.

One can take inspiration from the web, screen shot it and export it to the apps I mentioned above. You can edit it; draw, alter shapes, size and color of the object that you have captured from the web. When you are done you can save it or share it to someone via email, the web or any of the social media sites available. Once you get the hang of it, it's actually pretty amazing yet simple to do. Anyone who has had previous experience in owning an android phone would not be left out in the Note’s OS environment. From out of the box, the android 2.3.5 Gingerbread was pretty much easy to use and navigate and it’s pretty stable too. Transitions from closing and opening from one application to another is also flawless and seamless.

The UI (user interface) of Samsung called the Touchwiz is also something to write about. On the note, the Touchwiz is blazing fast compared to other Samsung gadgets I have tested so far. Moving from one window to another is smooth without any kind of lag for that matter. Upgrading the OS to ICS was easy and done over the air. As I have just upgraded to ICS last week, I have yet to discover just how exactly the ICS is better than its previous OS. The ICS is as table as the Gingerbread, so far its working just fine. 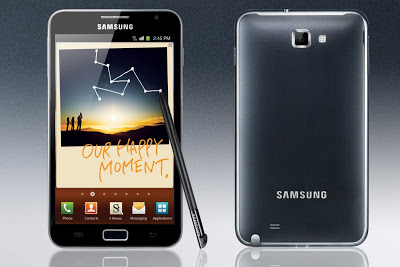 The Note for me is the best phone for mobile photography. Combined the 8MP rear camera with autofocus, image stabilization and LED flash with a crisp super AMOLED screen, then you have yourself a truly wonderful piece of gadget for taking pictures and instantly upload and share your photos to social media sites like Facebook, Twitter and my favorite, Instagram with absolute ease. Samsung Note has the biggest battery capacity in its class. However, with heavy use I only get 4-6 hours from it, with moderate use on both phone and web browsing it should last you a day or maybe a day and a half before it needs to be recharged. Other options for you to extend battery life are to buy a back up power pack or an original extra battery. But I would recommend buying the external power pack since it’s quite handy and you will only need to use it when necessary. It also comes with its own charging cable. Buying an extra battery means that you will also need to buy an external charger (sold separately) for the extra battery since you can’t charge both batteries at the same time on the back of the Note. That said, the Note is a great piece of gadget (no matter how you look at it; a large phone or a very small tablet). No wonder why it is consistently in every Top 10 smartphones ratings in leading tech-magazines and it even made it to Top Editor’s Choice in others. The only drawback I see is that some would complain about its big screen size and if you have rather small hands, messaging and even just using it as a mobile phone could be quite cumbersome and taxing. So, is it a tablet or a phone? Well, get one and decide for yourself.

Carl Cabusas
A graduate in Business Administration and Economics, Carl Cabusas works as a real estate professional by day. He has been a car enthusiast at a very young age while growing up in the U.S influenced by his uncle who is an avid car collector. The passion for travel, lifestyle, gadgets and watches is his take on living life in the right balance of yen and yang (work and life balance) in the hopes of encouraging others to work hard but at the same time enjoy life and live it to the fullest and discover their own passion.

Confirmed: The new iconic Volkswagen Multivan Kombi is ready to make a local comeback in Q3 of 2021
Today’s generation of youngsters and new drivers may have only seen the legendary

Mercedes-Benz Celebrates Women’s Month with Exclusive Deals
Global Star Motors, the exclusive retailer of Mercedes-Benz in the Visayas and Mindanao, takes part in

2018 - 2019 Suzuki Vitara
The Vitara nameplate has always been an important vehicle for Suzuki.